If the cold persists for several days, it weakens the mucosa, which can be subsequently “colonised” by bacteria. This is a secondary bacterial infection called sinusitis. The signs of this secondary infection are a thick nasal discharge and symptoms which last for several weeks. Bacteria can also cause other ailments following a cold.

• Often accompanied by a fever and a bad cough
• In children, sinusitis is not necessarily accompanied by a fever
• Pain when pressure is applied to the cheeks and forehead
• Yellow or greenish secretions from the nose or the back of the throat
• Headache, toothache or earache according to the inflammation site
• Draining of secretions in the throat in case of chronic sinusitis
• Nose bleeds at the end of sinusitis.

For sinusitis that lasts at least one week, the doctor will prescribe antibiotics.
If the sinuses are very congested, the doctor might also prescribe corticosteroid, a topical spray. This medicine progressively decreases the inflammation of the nasal mucosa. In-between, a nasal decongestant can provide relief.
In severe but rare cases, when the sinuses become permanently blocked, often after repeated infections, surgical treatment may be necessary. It consists of cleaning and widening the opening of the bone cavities under general anaesthesia. 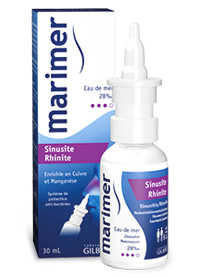