Sometimes called hayfever or pollinosis, this ailment is also known as allergic rhinitis which literally means “allergic inflammation of the nose”. Allergic rhinitis can last an entire season or an entire year. For most people, an allergen triggers their symptoms at about the same time each year. In the Spring, symptoms usually appear because of tree pollen, while grass pollen is the culprit in Summer. In Autumn, symptoms are usually due to weeds. Most people who suffer from allergic rhinitis are sensitive to more than one allergen.

• A tickly nose feeling and frequent sneezing due to inflammation of the mucosa of the nasal fossae
• Runny nose
• Itching and redness around the eyes
• A tickly throat due to the discharge of nasal secretions
• Nose bleeds are possible.

The doctor will prescribe an antihistamine medicine which will combat the effects of histamine, which causes sneezing and nasal discharge. A corticosteroid spray which will treat the causes of the allergy and decrease the mucosal inflammation will also be prescribed. A nasal or oral decongestant can be temporarily added for quick relief. Nevertheless, the treatment of rhinitis remains complex, because the cause of the allergy must be identified through skin tests carried out by an allergist. 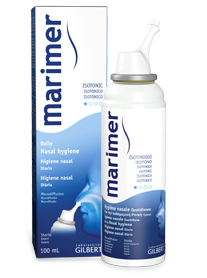 Did you know that the effectiveness of our Marimer Daily Nasal Hygiene spray is clinically proven?